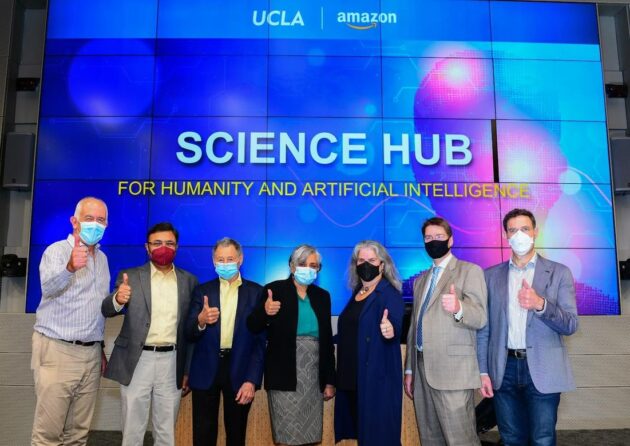 Amazon and UCLA are launching a research hub that will draw upon industry and academic research to address the social issues raised by the rapid rise of artificial intelligence.

The Science Hub for Humanity and Artificial Intelligence will be based at the UCLA Samueli School of Engineering in Los Angeles, with Amazon providing $1 million in funding for the initial year of the partnership. The two parties may renew the agreement for up to four additional years.

In a news release, UCLA said faculty from across its campus will collaborate with Amazon’s AI specialists to identify and solve research challenges in the field of artificial intelligence, with particular attention to issues such as algorithmic bias, fairness, accountability and responsible AI. The collaboration will support doctoral fellowships and research projects as well as community outreach programs.

“We are delighted  to collaborate with Amazon on this effort to examine the future of artificial intelligence and its implications for our world,” UCLA Chancellor Gene Block said. “The Science Hub for Humanity and Artificial Intelligence will advance AI-related discoveries and deepen our understanding of a discipline that is revolutionizing the way we use and understand modern technology.”

The hub will support AI research under the guidance of an advisory group headed by UCLA computer science professor Jens Palsberg. The group, which includes representatives from Amazon and UCLA, will develop, solicit and select research proposals — and review nominations for fellowship recipients.

Funding for the hub will support annual fellowships of $70,000 each for students in the second, third or fourth year of a UCLA Engineering doctoral program. Fellows will also be invited to take part in paid summer internships at Amazon.

“The hub is designed to foster the educational mission of the university, so it can best educate the diverse talent needed to sustain the AI revolution in the years to come, in a way that benefits all sectors of society,” said Stefano Soatto, vice president of applied sciences for Amazon Web Services AI. Soatto, who is currently on leave from his position as a UCLA computer science professor, was instrumental in helping Amazon and the university establish the science hub.

UCLA organized an “Amazon Science Day” event today to celebrate the unveiling of the hub as well as the 52nd anniversary of the birth of the internet. On Oct. 29, 1969, UCLA computer scientist Leonard Kleinrock directed the transmission of the first internet message from his lab to Stanford Research Institute. (The network crashed after Kleinrock’s team sent the first two characters: the “LO” in LOGIN.)

The science hub is the latest example of Amazon’s collaboration with universities across the country to advance research in AI and other fields. Just this week, for example, Amazon Web Services spotlighted the debut of its quantum computing research center on Caltech’s campus.

In Seattle, Amazon’s hometown, the University of Washington has received a healthy share of support: In 2012, Amazon established two $1 million endowed professorships in machine learning at the Paul G. Allen School of Computer Science and Engineering. And in 2016, Amazon provided $10 million in funding for a new computer science building.at UW.

At least six UW faculty members have been designated Amazon Scholars, which means they spend between 20% and 90% of their time at Amazon. One of those scholars is economics professor Pat Bajari, who is Amazon’s chief economist.

UW computer scientist Ed Lazowska said the university benefits from having Amazon’s headquarters in the same neck of the woods. “Because Amazon is a 20-minute bicycle ride from campus, we have had no need to formalize a broad agreement with them, in contrast to universities located thousands of miles away,” Lazowska told GeekWire in an email.

This report has been updated with further information about Amazon’s ties with UW.