Inside Climate Pledge Arena: New venue is a ‘very Seattle’ mix of high-tech and deluxe experiences 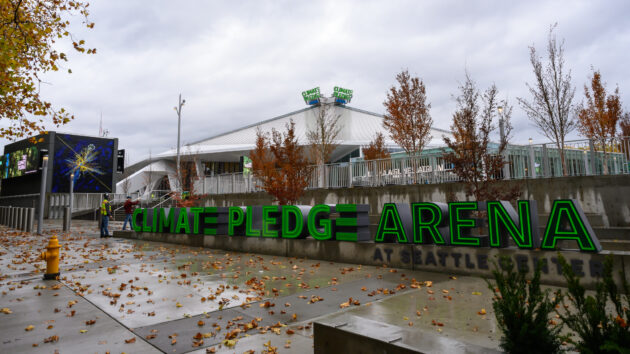 This is not the Coliseum that was constructed here almost 60 years ago, or the KeyArena where fans last saw the Sonics play in 2008. Seattle has a reimagined sports and entertainment venue fit for a city that has undergone its own extensive changes over the past decade, fueled largely by a booming tech sector.

Climate Pledge Arena opens this week and it has the look and feel of a new Seattle, just blocks from the headquarters of Amazon and offices of other tech giants. And it’s loaded with the technology bells and whistles visitors have come to expect as they engage with more and more services tied to their smartphones or their biometrics.

Amazon bought the naming rights in June 2020 and put the Climate Pledge name on the building to draw attention to an initiative aimed at fighting global climate change. Around the outside and all throughout, visitors are reminded of green technologies that are used inside and tie back to the pledge.

With sustainability as a foundation, it’s all been built under an iconic and preserved roofline which first appeared on the city’s skyline for the 1962 Seattle World’s Fair, as the city previously laid out its vision for the future.

“To build something like this, it just looks so different than any other arena in the world,” said Todd Humphrey, the tech veteran who is senior vice president of fan experience for the Seattle Kraken, the new pro hockey team which plays its first home game at the venue on Saturday night.

Humphrey led GeekWire on a top-to-bottom tour of Climate Pledge Arena on Wednesday, showing off everything from giant LED message boards, luxury suites, Amazon-powered retail, multiple locker rooms, and a living wall of plants 50 feet below street level. At one point he called it all “very Seattle.”

Watch the video above and keep scrolling for highlights and photos from the tour.

The roof and surroundings

Standing in front of the arena in the Lower Queen Anne neighborhood has a different feel than it did the last time GeekWire visited and found a giant hole in the ground. Preserving the historic roof presented a 44-million-pound renovation and engineering challenge as it was detached from 20 original concrete Y-columns and four gigantic buttresses that previously supported it.

The roof “floated” above 72 temporary steel columns, cross-beams and a steel reinforcement structure called a “kickstand” and construction crews dug down and excavated 680,000 cubic yards of earth. Going down and out for a 740,000-square-foot arena has made Climate Pledge almost twice the size of KeyArena.

Situated below the Space Needle, the Climate Pledge Arena sign has been in place for months, and now a landscaped pedestrian park circles the building. All back-of-house facilities such as trucking deliveries have been moved underground.

Nine sizable pieces of public art have been installed and visitors can engage further via QR code on their mobile devices.

The arena stores will feature Amazon One palm-scanning tech, which lets customers enter and pay with the wave of a hand. The stores include 14 Hands from Chateu Saint Michelle, Lil Woody’s Burgers and a Starbucks grab-and-go spot. The fourth is Big Chicken, a franchise from NBA superstar Shaquille O’Neal.

Just Walk Out relies on an array of ceiling cameras and shelf sensors to know what a customer is picking up and walking out with. Payment is facilitated through a credit card used to enter, or one that’s associated with the scan of a visitor’s palm. The idea is to keep people moving rather than standing in line and get them back to their seats as quickly as possible.

Two of the stores sell alcohol and an attendant checks IDs at those.

“One of the things that we focused on early was ensuring that we were doing as much as we could to cut down on lines,” Humphrey said.

He said that Amazon CEO Andy Jassy, who is a member of the Kraken ownership group, leads a tech committee that looked at how to better reduce friction and make it a much more efficient experience for fans.

“What we wanted to get away from here was the belly up to the bar where you wait, wait, wait, and then the same person has to take your order, fulfill your order, and then take your payment,” Humphrey said. “We just think it’s more efficient. … It should be faster, especially as people get to understand what products are where and they can get in and get out really quick.”

The extra tech needed to power Just Walk Out is visible in the ceiling of Big Chicken, which had to be lowered to allow the tech to work better. Fans wanting to use the Amazon One palm scanning can register in about 45 seconds at kiosks in the arena.

Amazon’s fingerprints aren’t just on the name of the building or the technology being used to power parts of it. The company also helped put together a massive wall of plants on a lower concourse that is very reminiscent of what it built on its nearby corporate headquarters campus with the Spheres.

The wall of ferns and other plants, 50 feet below grade, is interspersed with large, round LED screens showing nature scenes or images of sustainability tech such as windmills or electric vehicles or solar panels.

Climate Pledge aims to be the first net zero carbon certified arena in the world, generate zero waste from operations and events, and be powered with 100% renewable electricity. It will also create the “greenest ice in the NHL” by using reclaimed rainwater for its ice system stored in a giant tank underground next to the arena.

The 36,000-square-foot atrium on the south side of the building serves as the main entrance. Filled with natural light, the space offers a dramatic introduction to the new arena. A large Alaska airplane model floats above one escalator and a plane tail is suspended above another.

Climate Pledge has 28,175 square feet of digital signage — the most in the world for a sports and entertainment venue — and it feels like the most dramatic ones are here. Alongside an escalator and stairs to a lower concourse, the wall is filled with an LED display projecting a giant waterfall or a forest.

“It’s gonna allow us to tell stories all the way through the fan experience and fan journeys,” Humphrey said. “What you’re seeing today is a lot around the climate. You’re seeing forest over here, you see waterfalls, so as soon as somebody comes into this building they’re immersed with whatever that story might be.”

For Kraken games or for Friday night’s Coldplay concert, for instance, the messaging and experience will change.

There are more than 30 corporate partners with branding experiences throughout the building. Some of the fancier ones are attached to exclusive club spaces and suites, with such amenities as valet parking, premium food and beverage offerings, prime seating locations and more. Seattle-based financial data company Pitchbook is a suite-level sponsor, for instance.

Arena creators Oak View Group turned to Rockwell Group, designers of high-end interiors at hotels, museums and restaurants, to come up with a mix of clubs, suites and lounge spaces, including the spacious Symetra Club, named for the Bellevue, Wash.-based financial services company.

There’s a PNW Craft Beers corner with brick and neon that evokes a beer-garden feel in the heart of the $1 billion arena.

“For me it just feels very Seattle,” Humphrey said. “We’ve got cement, hardwoods in different designs, green tile. It really tried to bring the essence of what Seattle is and how it feels.”

At the bottom of the arena, spaces such as locker rooms for athletes and green rooms for musicians are mixed along hallways that also feature Tunnel Club suites — more higher-end accommodations for fans who might have seats at rinkside and want to party in private pre-game.

The Kraken locker room is as luxury as such a space might get. The team’s giant ‘S’ logo is embedded in the ceiling because it’s bad form to walk on your logo. Off the main room there’s a weight room, a sauna, two hydro-therapy tubs, a trainer’s room, a team hangout space, a team meeting space, and more.

The Seattle Storm also have a locker room down here  — and their championship banners are hanging high in the main arena.

And a space has even been set aside for a future NBA team — a big wish for a city that lost its Sonics to Oklahoma City 13 years ago. The 7,000-square-foot room is full of a bunch of miscellaneous storage items right now, but GeekWire did spot a Seattle Sonics flag hanging at the back of the room.

Humphrey laughed when asked to clarify that Climate Pledge is indeed prepped for the return of the Sonics, and would only say that space has been set aside for if and when the NBA makes that decision.

Down the hall closer to where bands might enter the arena to take the stage, Amazon Music has put its stamp on a band hangout room that actually features a small recording booth and studio.

While the street view outside, the atrium, the concourse amenities and clubs provide a dramatic approach and experience at Climate Pledge Arena, the reason fans are here is for what will take place on the ice, basketball court and concert stages.

In the sprawling arena bowl, 85% of the seats are below grade. Capacity is 17,100 for NHL hockey and about the same for a concert with a stage at one end.

The Foo Fighters opened the place Tuesday night and Oak View Group CEO Tim Leiweke said the band’s lead singer, Dave Grohl, “kept telling me he was going to tear the building down. He came close. At 2 1/2 hours I think he was intent.”

On Wednesday, another crew worked to assemble the stage and apparatus necessary to power Friday night’s Coldplay concert (which will also be live streamed on Amazon Music). Beneath it all is an ice rink that will be quickly uncovered and prepped for hockey on Saturday.

Humphrey said there wasn’t a bad seat in the house and that sound baffles in the ceiling and overall sound engineering have made the venue a much better place to see live music than previous iterations.

“Our CEO likes to joke that you had good value for your money because you heard the show three times,” he said about reverberation in the old arena.

Humphrey, a Canadian and former hockey player himself, said he couldn’t wait to hear the roar of the Kraken crowd on Saturday.

Check out more photos from GeekWire’s tour below: