Paleontologists trace the evolution of tusks to toothy Triassic creatures 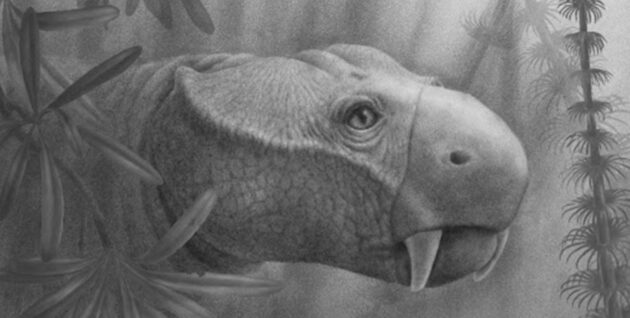 Dental exams conducted on fossils from more than 200 million years ago suggest that the earliest true tusks were sported by breeds of weird-looking creatures known as dicynodonts.

The evidence, laid out today in the Proceedings of the Royal Society B, could shed light on how species ranging from elephants and walruses to warthogs and rabbit-like hyraxes came to have tusks.

“Tusks have evolved a number of times, which makes you wonder how — and why?” study co-author Christian Sidor, a biology professor at the University of Washington and a curator at UW’s Burke Museum of Natural History and Culture, said in a news release. “We now have good data on the anatomical changes that needed to happen for dicynodonts to evolve tusks. For other groups, like warthogs or walruses, the jury is still out.”

Dicynodonts, which existed in the Permian and Triassic eras from 270 million to 201 million years ago, appear to be the earliest group of animals possessing tusks. Their label comes from the Greek term for “two canine teeth.” The various species ranged in size between present-day rats and elephants. They’re classified as mammal-like reptiles or reptile-like mammals.

Either way, they’re regarded as ancestors of present-day mammals. “Until I started working on this study, I never really thought about how tusks are restricted to mammals,” said lead author Megan Whitney, who earned her Ph.D. at UW and is now a postdoctoral researcher at Harvard University.

To delve into the origins of tusks, Whitney, Sidor and colleagues from Chicago’s Field Museum and Idaho State University analyzed samples from 19 fossilized teeth, representing 10 different dicynodont species. Most of the specimens were collected during expeditions to Tanzania and Zambia. Those specimens are currently stored at museums in the U.S., but they’ll go back to Africa at the end of the research project.

One of the first research tasks was to define what actually constitutes a tusk. “It’s a surprisingly ambiguous term,” Whitney said.

She and her colleagues argue that for a tooth to be a tusk, it has to extend out past the mouth and keep growing throughout the animal’s life. Unlike the teeth of most mammals, tusks should have a surface made of soft dentin rather than hard enamel. That requirement would rule out a rat’s teeth, for example, even though they sometimes stick out.

Some of the teeth found in the dicynodont samples wouldn’t qualify as tusks either, because they were coated in enamel instead of dentin. The researchers subjected the teeth to CT scans and put paper-thin samples under a microscope to distinguish tusks from non-tusks, learn how the teeth were attached to the skull and find out how they grew.

Earlier dicynodont species tended to have large teeth rather than true tusks, but the samples suggested that multiple species evolved independently to possess tusks as the years stretched on. Researchers also found that the ligament attachments between tooth and jaw adapted over time to accommodate tusks.

Tusked animals would be well-adapted for rooting in the ground. And if they damaged their tusks during tussles with attackers, that damage could eventually be repaired. Enamel-coated teeth, in contrast, would remain permanently broken.

Future studies could provide additional insights into how dicynodonts and other ancient species used their tusks — and more generally, how they lived.

“Bones and teeth can capture a record of an animal’s life in their tissues,” Sidor said. “On a tusk that’s ever-growing, the dentin records a daily measure of how fast the animal was growing. Did it grow faster or slower over certain seasons? Stop growing for a certain period of time? Creating thin sections of bones and teeth opens up a lot of other interesting things about the animal, almost like analyzing tree rings. These are the types of questions we can continue to research.”

In addition to Whitney and Sidor, the authors of the study in Proceedings of the Royal Society B, titled “The Evolution of the Synapsid Tusk: Insights From Dicynodont Therapsid Tusk Histology,” include Ken Angielczyk and Brandon Peecook.