Seattle mayoral debate: Both candidates want higher taxes but disagree on who should pay them 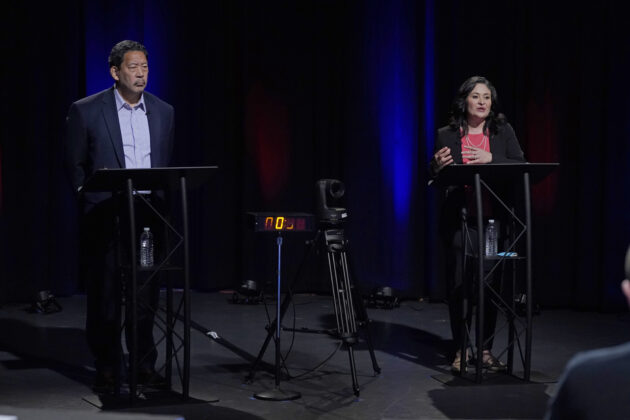 But who pays those taxes — including large employers such as Amazon — remained a point of contention.

Asked if Amazon, the city’s biggest employer, should do more to mitigate concerns about its effect on soaring housing prices and infrastructure, Harrell said the online retail giant should “pay their fair share of taxes.” He then vowed to hold the company “accountable.”

But when pressed for taxing specifics, Harrell pivoted and talked about addressing the lack of a Washington state income tax. “We will look at that tax structure and revise it,” he said.

Gonzalez, by contrast, pointed her finger directly at Amazon’s coffers. “It is critically important for us to make sure we have a mayor who is serious about requiring all large profitable corporations (to) pay their fair share.”

She added: “Let’s be real about this. I’m the only candidate on this stage who means it.”

Both candidates in 2018 initially voted to approve the so-called Amazon head tax, only to later switch their votes to repeal it.

Harrell’s road to a state income tax would be a steep one. Currently, Washington court decisions have generally held that the state constitution’s sharp limits on income taxes make a statewide, non-uniform income tax difficult without a constitutional change. (A 2019 court decision on a failed Seattle income tax might have opened the door slightly, however.)

Harrell said corporations based in Seattle should match their corporate goals with city’s civic needs.

“They have to align their corporate social responsibility goals with that of the city,” he said. “That would be affordable housing. That would be homelessness.”

“When you look at the wealth that these large corporations have, they have to not only pay their fair share of taxes, they have to be aligned with many of the issues that they caused,” he said.

“I think our relationship with Seattle had ups and downs, frankly,” Jassy said. “I think the first 20ish years (was) pretty collaborative. We decided to build a downtown campus. (The city) was very supportive and solicitous.”

But then five years ago, the mood changed, Jassy continued.

“The City Council has become less enamored with business or with Amazon,” he said. “It’s just been rougher.” Jassy added that Amazon increasingly is looking to nearby Bellevue for its expansion goals.

“(Amazon’s) workers and their future workers want to live and work in this city,” she said.