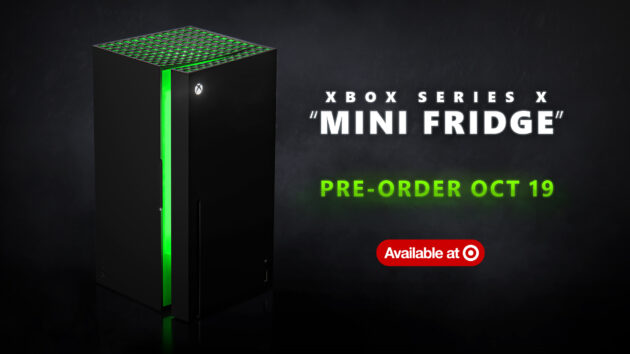 Paying off on a running joke from last summer, Microsoft’s Xbox-themed mini-refrigerator is coming to retail in December. Pre-orders open next Tuesday, Oct. 19.

The Xbox Series X Mini Fridge is exactly what it sounds like it is: a small refrigerator built to look like the Xbox Series X, which can hold 10 12-ounce cans of soda and features two door-mounted shelves for snacks. The front of the Mini Fridge also has a USB port that can be used to charge devices.

You Voted For It. Now We’re Making Your Xbox Series X “Mini Fridge” a Reality. Pre-Orders start October 19th. Available at retail in December for $99 (£89/€99). Details below on first wave of units this holiday across 10 global markets. #XboxAndChill???? https://t.co/WWjI58heyP pic.twitter.com/KB7tVuvNfq

Originally announced after Microsoft’s E3 games showcase in June, the Xbox Mini Fridge is basically what happens when Microsoft decides to lean into a joke, and can also be usefully blamed on Twitter.

In Oct. 2020, as it warmed up to launch the Xbox Series X, Microsoft made a full-size Series X-style fridge and delivered it to rapper and games enthusiast Snoop Dogg as a birthday present. This followed up on a number of jokes that had been circulating since the console’s reveal, which included comparing its brick-like design to a refrigerator.

Then, back in April, Twitter’s marketing department held a competition called the Brand Bracket, which asked fans to vote for their favorite overactive, vaguely self-aware marketing-related Twitter accounts. The grand finals put Xbox up against Skittles, with Greenberg promising to make the Xbox Mini Fridge a reality if Xbox won. Xbox subsequently clutched it out with 50.5% of the vote, so now here we are.

The Mini Fridge was produced through a partnership with the production firm Ukonic, based in Las Vegas. In addition to a variety of tie-in products for Disney and Marvel, Ukonic also creates merchandise for Microsoft’s Minecraft and the forthcoming Halo Infinite.

The first production run of Xbox fridges will be available at retail for $99.99. In North America, it’s initially a retail exclusive at Target stores; Canadian customers can also order an Xbox fridge through Target’s website.

Xbox fans in the UK can order their fridge through GAME for £89.99. In France, Germany, Italy, Ireland, Spain, Poland, and the Netherlands, the fridge will sell for €99.00 at GameStop EU, Micromania, or Toynk via Amazon. Other interested nations will likely have to wait until an unspecified point in 2022, as Microsoft promises to “expand regional availability” over the next few months.