Robbie Bach on 20 years of Xbox, the future of the U.S., and his new novel, ‘The Wilkes Insurrection’ 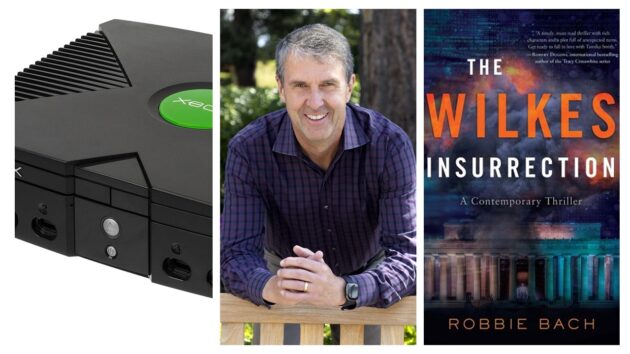 Can you believe Xbox has been around for 20 years?

Our guest on this week’s GeekWire Podcast, Robbie Bach, was there at the beginning, and led Microsoft’s gaming business for many years as chief Xbox officer and president of the company’s Entertainment & Devices Division.

These days, Bach is board chair of the Bipartisan Policy Center, a Washington, D.C.–based think tank that promotes bipartisanship. He serves on the national board of governors for Boys and Girls Clubs of America and is on the board of the Magic Leap augmented reality company.

And to top it all off, he just published his second book, which is his debut novel, a techno-thriller called The Wilkes Insurrection.

Listen below, and subscribe to GeekWire in Apple Podcasts, Google Podcasts, Spotify, or wherever you listen. Continue reading for edited highlights.

How he ended up writing a novel: “I wrote my first book, Xbox Revisited, which you and I discussed ages ago. And I discovered I really liked writing. So I started writing fiction based on characters. So I literally wrote 100 pages of character arcs, about four or five characters that have been running around in my head. And from that, I said, ‘Oh, I can see a plot here.’ … At the end of the day, there’s a little bit of a message about what’s going on in the country.”

Imagining the book’s protagonist: “The main character, Major Tamika Smith, is kind of a badass, but also has real human challenges, real issues she’s faced in her life. And I think that that’s what draws me to her. I probably spend 40% of the time in the book writing from a woman’s perspective, which is super interesting and intellectually challenging.”

Reflections on the Xbox experience: “When you’re a startup, the likelihood of success is low. And Xbox was absolutely a startup. We weren’t going to fail because of a lack of funding. But just like any other startup, we had to figure out what made us different. We had to figure out what differentiated us, and why people were going to accept another entry into the video game space.”

Leadership lessons learned: “The biggest thing I would tell myself is to pay attention to strategy, and pay attention to culture. When I talk to startup CEOs now, I’m asking them questions about the technology and the product, and all those kinds of things. But I ask way more questions about, do you actually understand your core strategy? And have you really consciously thought about the culture of your group? It’s a function of what I learned during that startup of Xbox.”

His role on the Magic Leap board: “I joined the board because I’m pretty excited about AR technology. I was never a big fan of virtual reality. I’m still somewhat cautious about what I would call full virtual reality. But the idea of being able to augment our surroundings, and interact with that augmentation, is quite powerful.”

Challenges for Facebook in the ‘metaverse’: “When your business model is eyeballs, it motivates you to do things that aren’t necessarily in the best social interest. And that’s fundamentally the problem. Alex Kantrowitz wrote an article this week arguing that LinkedIn is the best social media model because it doesn’t rely on advertising for much of its revenue. That’s fundamentally what’s screwed up on social media: the business model doesn’t align with doing the right thing. And it’s really hard to get out of that bind.”

Hope for the future of the country: “We’ve been in worse places as a country over the last 250 years. And we’ve been more splintered and more fragmented. Leave aside the Civil War, which is the obvious example. But if you actually look at history carefully, there’s been four, five, six other examples where the country was deeply divided, and where we figured out a way to get to the other side. … It’s going to take a next generation of leaders to come to the forefront who say, ‘Hey, we’re going to lead in a different way than the people we have leading us now.’ “

Listen to the full episode above, and subscribe to the GeekWire Podcast for previous episodes. Hosted by GeekWire co-founders Todd Bishop and John Cook. Produced and edited by Curt Milton. Theme music by Daniel L.K. Caldwell.